Nine miles north of Fredonia on Harper Road, just as the road angles to the west to follow the southern bank of the Verdigris River, stands a sign marking the vicinity of Fort Row. Although nothing remains of the old fort, the area was a major part of one of the largest Indian tragedies of the Civil War.

Early into the twentieth century, residents were witnessing piles of human and animal bones throughout the area. The small stockade served about 80 local militia members. Fredonia and other nearby communities would not be established for several more years. 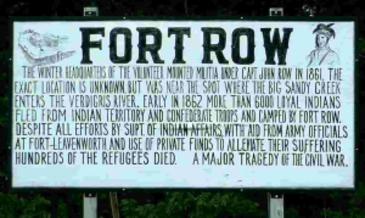 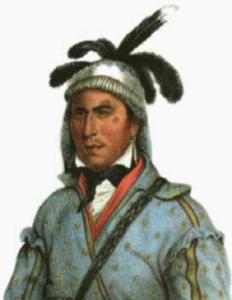 Creek Indian leader Opothleyahola and his people were forced out of Alabama and Georgia in the early 1800s after the sale of their lands to the government by the Lower Creeks. He led his people to Indian Territory on the Trail of Tears. There they settled and many prospered. Most lived in homes. Then came the Civil War.

Opothleyahola refused alliance with the Confederates, although many other Indians had joined their ranks. He received assurances from the Union that they would receive help and freedom in Free-State Kansas. He led thousands of Creek braves, women, and children northward. Along the way, they were joined by Union loyalists from other tribes as well as hundreds of slaves who had also been promised freedom in Kansas.

After surviving two major battles along the way north, the group was again attacked by the Confederates at Chustenahal (Bird's Creek). That battle in December 1861 left them fleeing for their lives in the bitter cold without clothing or provisions. It was reported that 10% died from exposure within three months, leaving a trail of blood on ice. The survivors continued the trek north hoping to get aid at Fort Row in Wilson County. [Opothleyahola]  Fredonia and other cities to the south had not yet been established. The little Fort Row was overwhelmed by the influx of refugees and unable to provide much relief. Many died during that bitter winter around Fort Row.

Eventually, many of the survivors continued on their trek to Fort Belmont in Woodson County, then to LeRoy in Coffey County. From LeRoy, 1,000 of the Indian braves were marched to Camp Hunter in Humboldt where they were inducted into the Union Army as the First Indian Regiment. Opothleyahola died in 1863.

More information can be found at https://www.muskogeephoenix.com/news/lifestyles/three-forks-history-opothle-yahola-offered-a-pardon/article_28e014b1-c40d-52dd-b768-3f97f3008f41.html